I just saw that term again watching Ingraham Angle and referring to the policies of the Biden administration. We're hearing about the gas shortages in the south and mention of Carter-era economy.

I came a bit too late for the Jimmy Carter administration - oh I was here on Earth just no idea of what the situation was, a bit too young. Though as I enjoy looking through history it seemed not just the Carter years but the 1970s in general were just rough years economically. You hear about inflation or stagflation and then you hear about gas lines. And what marked the Carter years is his "malaise speech". [VIDEO]

If I may explain Joe-mentum, the first time I heard the term is on the old Protest Warrior forums. It was sort of a joke on the presidential campaign of another political Joe - Sen. Joe Lieberman (D-CT) who ran for the presidency unsuccessfully in 2004. I think he used the term Joe-mentum which is supposed to mean positive momentum, however, in my mind because of the direction of his campaign at the time became a way to say he's going to lose.

Used in a sentence, yeah so the New York Rangers had a great game against the Black Hawks and had a one goal lead but then Joe-mentum struck and they lost.

It seems since Joe Biden took over the presidency earlier this year, we've had nothing but rough moments. The transition didn't start off smooth and the right seems very ready to attack some of his policies. The right is accusing his administration of incompetence. It seems in more ways than one nothing has gone well - the border, the economy, the world - the current news out of Israel is that they're at it again with the Palestinians, even issues of crime.

I'm starting to feel bad for Joe-mentum Biden. This is a shame for a man whom I do believe really wanted to be President he tried it so many times before and floundered. I could say he lucked out in edging out a very combative and loud incumbent President - and yes leaving aside any potential voter fraud I think President Donald Trump's general combativeness is one reason he's not our President right now. I feel as if for a man who spend most of his adult life as a public official has earned better than this. 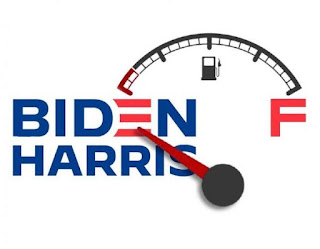